No,  2015 wasn't a good year here at Nell's Farmhouse...it was the best year we've had in business to date!  Its great to be able to sit down and write that after what seems like the fastest year in the history of fast years.

On the 2nd of January last year we sat down and had a chat about the year ahead.  We decided to make a conscious effort to use social media to connect with existing and prospective customers.  The plan was to do one blog post per month.  So far we have only missed one.  We really appreciate everyone who takes the time to read what we write and hope you find it interesting.

This year we delved into the world of Twitter with the help of the Tweeting Goddess, Samantha Kelly.  We have built our twitter followers up to almost 500 followers in a short space of time. Twitter is great fun.  We have found the #Irishbizparty on Wednesday nights very beneficial for connecting with people all around the country.  This networking has definitely benefited our business in a positive way and in turn our occupancy has increased.

We had a lot of fun in 2015, we brought some local school kids on a journey back in time and showed them how people lived long ago.  We get a great kick out of the school visits.  The questions they the kids ask are fantastic.  They find it all fascinating that people had to go to a well to bring back water and that all the cooking was done over a fire.

In April we were invited to Dublin Castle to a training day for people who hold Heritage Week events.  After that we went on to Merrion Square to speak with the Irish Walled Towns Society about our award winning heritage event in 2014.  Subsequently we were invited to meet our President Michael D Higgins in the Heritage Councils head office in Kilkenny.  It was such an honour to meet President Higgins and listen to him speak at the event in June. 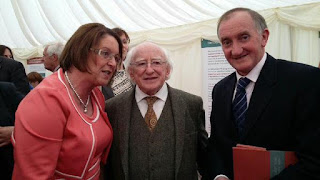 Our favorite week of the year rolled around very quickly, Heritage Week.  As a follow on from our award winning Traditional Irish Wake re-enactment in 2014 we decided to hold a Traditional Wedding set in 1950's Ireland.  We had so much fun putting this together with some fantastic people from our community getting involved.  Everybody went to great efforts to make sure that the event was a success.  All the guests came turned out in costumes appropriate to the 1950's.  The Bride and Groom were brought from the church in Clonea Power by horse and cart.  This attracted a lot of attention with people stopping to take pictures along the way.  There was the traditional fare of cold ham and hard boiled eggs, followed by trifle and wedding cake, There were some fine speeches from the bridal party.  Live Irish music was played in the kitchen by members of the local Comhaltas Ceolteoiri until the early hours with a few songs and stories thrown in along the way.  Everything went off really well as people got into the spirit of the occasion.  It was so good we are unsure how we will top it next year. 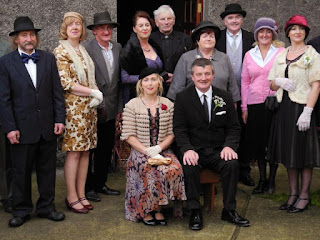 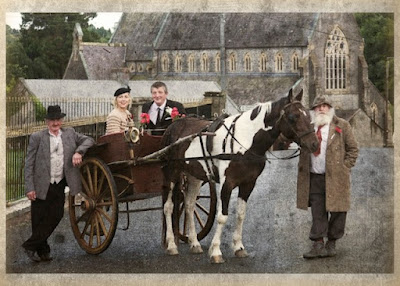 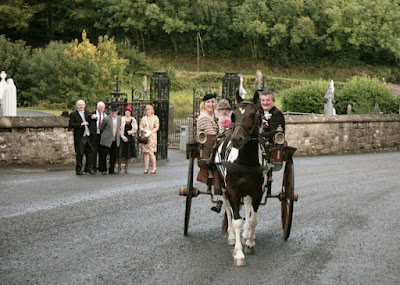 Now were only six hours away from 2016 we would like to thank everyone for all their custom during the year and we look forward to welcoming you back in 2016.  A huge thanks must be said to our family, friends and neighbours throughout our community.  There really is a great community spirit in this area and we are very lucky to live around such great people.  Thanks you all!

Wishing you all a very healthy and Happy New Year.
Roll on 2016